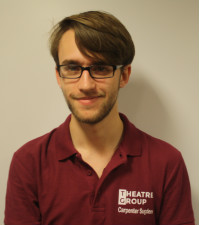 Andy is Theatre Group's Webmaster for 2015/16. This means he can edit each and every one of your profiles. This means you should be nice to him.