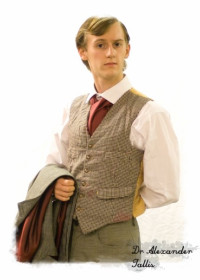 I've always endeavoured to break stereotypes and generalisations, so joining Theatre Group in the midst of a Computer Science degree seemed a backwardly logical choice. I've loved theatre for as long as I can remember, and TG has provided me with some of my most thrilling opportunities and experiences, as well as good friends and great laughs!

The Great Fire of Edinburgh, Halloween on Surge Radio (2010)