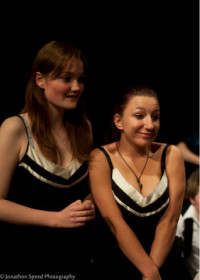 In essence - I love acting! I'm a part of TG 'cause I like to escape from Maths and Finance. I'm the treasurer so I can justify it on my CV. 'Acting deals with very delicate emotions. It is not putting up a mask. Each time an actor acts he does not hide; he exposes himself' - Rodney Dangerfield