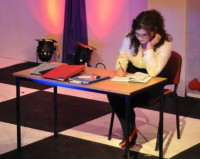 We are a society for anyone with an interest in acting, writing, directing or producing a piece of theatre; we also provide fun weekly workshops which aim to develop all of these skills. If you're curious about anything to do with Theatre Group then please don't hesitate to get in contact by email, we'd be really happy to hear from you!

Mrs Wayneflete, Keeping Down With The Joneses (2013)

Dax, The Spectacular Tales of Grinburrell (2011)

Smeraldina, The Love of Three Oranges (2010)